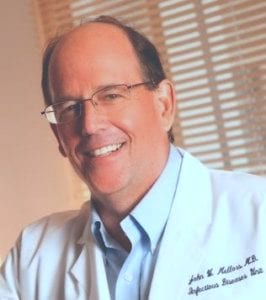 Dr. Mellors led several studies with samples from the multicenter AIDS cohort study (MACS) that established the critical relationship between plasma viremia (HIV-1 RNA) and HIV disease progression to AIDS and death in both acute and chronic HIV-1 infection. This work led to the universal use of plasma HIV-1 RNA and CD4+T-cell counts to estimate prognosis in HIV-1 infection and the optimal time to initiate antiretroviral therapy (ART). Dr. Mellors contributed to the development and testing of the first antiretroviral combinations that produced sustained suppression of viremia and recovery of CD4+T-cells that launched the current era of highly-effective ART. Presently, Dr. Mellors’ laboratory focuses on resistance to antiretroviral drugs used for treatment and HIV prevention and on mechanisms of HIV persistence and strategies to deplete the reservoirs that are the barrier to curing HIV infection. His work on HIV reservoirs showed that low-level viremia persists in most individuals on long-term suppressive ART and that the level of residual viremia is predicted by the level of viremia before ART. Current work focuses on identifying agents to reverse HIV latency and to eliminate HIV infected cells. The impact of innovative therapies on HIV reservoirs is being studied in Phase I/II trials of histone deacetylase inhibitors, monoclonal antibodies to immune checkpoint ligands, monoclonal antibodies to HIV envelope glycoproteins, and TLR agonists.